Link to this page

Midday Landscape
Order a Hand-Painted Reproduction of this Painting 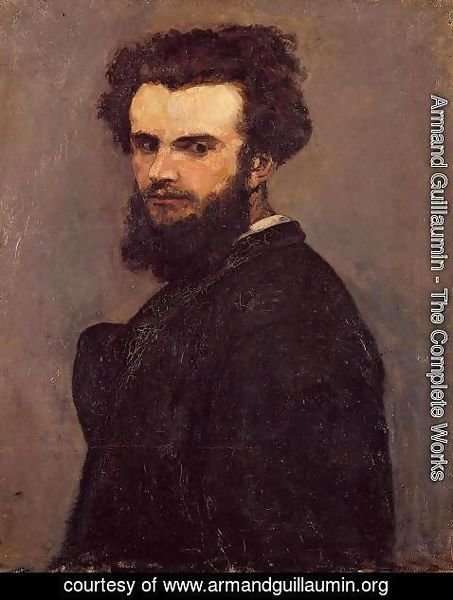 Jean-Baptiste Armand Guillaumin was born on the 16th of February 1841 in Paris, the grandson of Jean Joseph Guillaumin who was a notary by trade. Sent to school in Moulins, his stay there was notable for two things, firstly the mountainous landscape of the area inspired his interest in art and secondly the beginnings of a life long friendship with the famous impressionist collector Eugene Murer. By 1857 he was back in Paris working as a clerk in his uncles shop and combining this with art studies under the sculptor Caillouet. These studies however caused friction with his family and he left to seek new employment and at the same time continuing his art training at the Academie Suisse where he came into brief contact with Courbet, and formed more lasting friendships with Cezanne, Oller and Pissarro. Guillaumin exhibited in the first Salon des Refuses in 1863 together with Pissarro and Cezanne and in the following two years Renoir and Monet amongst others were added to their ranks. Even at this early stage in his career Guillaumin was considered an accomplished draughtsman using economic and dynamic strokes to execute remarkably mature compositions. He was quickly accepted into the circle of Zola and the directions in which Manet was taking art drove his interest. His paintings of this period incorporate a heavy impasto derived in no small part from his exposure to Courbet.

Guillaumin, like Renoir but unlike the majority of the Impressionist artists, had no private income and had to continue in menial work to support his vocation. The advent of the Franco-Prussian war did nothing to help his cause either, but the period after the war saw a greater linking of the artists who were taking part in the Impressionist movement. Guillaumin and Cezanne came into contact with Dr Gachet who bought a number of their works, as did Murer who had recently established a successful cafe in Paris. However times were bleak for the Impressionists as a whole with the advent of a rigorously conservative political regime and the trial of Courbet for his part in the commune. The salon voted to reject all Courbet's work and that of the Impressionists who were seen as part of the Realist school, although perhaps only Pissarro had any particular political leanings towards the commune. By the time of the scandalous Exposition de la Societe Anonyme Guillaumin and Cezanne were sharing the studio that used to belong to Daubigny, both in precarious financial positions although aided by the patronage of Gachet and Murer who remained close friends of the pair. In the mid to late 1870's Guillaumin's handling of the brush becomes lighter and more complex and his palette becomes more luminous in a move away from the style of Manet and Courbet. Both Cezanne and Guillaumin wished to create something solid out of impressionism, to create a sense of underlying form in nature. By 1880 the Impressionist group was beginning to fragment, particular camps forming around Degas and Pissarro with artists drawn to either side. Gauguin was becoming a particularly vocal member of the artistic society of that time and sided heavily with Pissarro, making every effort to include Guillaumin in his cause. Despite their initial misgivings, Renoir and Monet joined the Impressionist Exhibition of 1882 with Guillaumin, Gauguin and Pissarro (also included were Sisley, Morisot, Vignon and Caillebotte) but Degas was conspicuously absent.

Gauguin, a notoriously difficult and egotistical man, went to surprising lengths to keep Guillaumin within the impressionist fold during its fragmentation and during this period he was introduced to a wide range of emerging artists including Redon, Seurat and Signac with whom he formed a lasting friendship. By 1885 Guillaumin's studio had become a centre for the young group influenced by the work of Pissarro. All three artists from the Academie Suisse were revered by the emerging artists, but by 1885 the old guard of impressionism had effectively dispersed and the new styles of painting were causing further rifts. Gauguin who had worked himself to the centre of the impressionist group was allowing his temper and intolerance to destroy the group from the inside, and it was at this time that Guillaumin saw himself outgrowing the impressionist movement he had been a part of since its outset. However by the time of the last Impressionist exhibition of 1886 Guillaumin was receiving some rapturous critical appraisal. Paul Adam wrote in La Revue Contemporaine that he "was not aware of any other painter who has so correctly noted the corresponding values of the lights of the firmament and of the ground. their unification in colour appears to be perfect." Felix Feneon reiterated this writing of the same show "Immense Skies: superheated skies where clouds jostle each other in a battle of greens and purples, of mauves and of yellows."

It was in 1886 that Guillaumin married and settled down in a new address in the Saint-Sulpice area of Paris. By this time his close artistic relationship with Pissarro had dissolved with the latter's experiments with pointillism and Guillaumin's increasingly romantic art. By the end of the decade, abandoned by the travelling Gauguin, Guillaumin became a close friend and mentor to Van Gogh who was to provide an interesting stimulus to Guillaumin's work. Although Guillaumin by this time was more separate from the avant-garde than he had been since the beginning of the impressionist movement, there is evidence to suggest that the growing symbolist and post impressionist movements found much in his work to commend and admire, and in 1890 he made his return to the Independants after an absence of six years.

The first years of the 1890's saw a reduction of Guillaumin's circle with the deaths of Vincent Van Gogh and his brother (who was acting as his dealer), the moving away from Paris of Gauguin and Cezanne and the further artistic separation from Pissarro. All this occurred in the light of the meteoric rise of the symbolist movement of which Guillaumin played little part. In 1891 one of the Bonds he held paid a special premium of 100,000 gold francs, which had a profound effect on his lifestyle. He no longer felt the need to please patrons and critics and was able to pursue his own private artistic goals away from the pressures of the avant-garde. He travelled throughout France in these years, painting a great many mountain and coastal scenes often in the early part of the day or at sunset, and as such his continual fascination with strong vibrant colours and the effects of light grew. Much of Guillaumin's work at this time appears to anticipate the later work of the Fauves. In the latter 1890's Guillaumin's colour became more subtle and his painting more uniform showing the work of an artist at home with his style. The Great War provided the only interruption to his travelling which he resumed at its end at the age of 77, visiting his favourite areas of Agay and Crozant. In the 1920's age was reducing Guillaumin's output, but instead of being forgotten he was the subject of various monographs and in 1926 a retrospective exhibition at the Salon d'Automne. Critical appreciation of his work reached something of a peak in these years with a monograph by Des Courieres stating that "we have to recognise that in the domain of painting Guillaumin occupies a higher sphere" than Morisot, Sisley and Pissarro. He died amid such praise in 1927.

Although never reaching the fame of his contemporaries, his pioneering spirit and devotion to the impressionist technique made him one of the few artists that critics agree epitomise true classic impressionism, a select group that would include the likes of Monet, Pissarro and Morisot. (From artnet.com)

Report an error on this page